Modern Sociology defines a society as “a group of people who live in a defined geographic area, who interact with one another, and who share a common culture.”

Our definition looks at society from a metaphysics-first perspective. We define a society as a kind of metaphysical organism or mind that is made up of individual minds that agree to be part of that society either implicitly or explicitly.

Since science views minds as coming from the physical brain, we instead use the word ‘soul’ or ‘aethereal mind’ to refer to a society. In this way, a society can refer to:

By referring to a society as a soul, we: 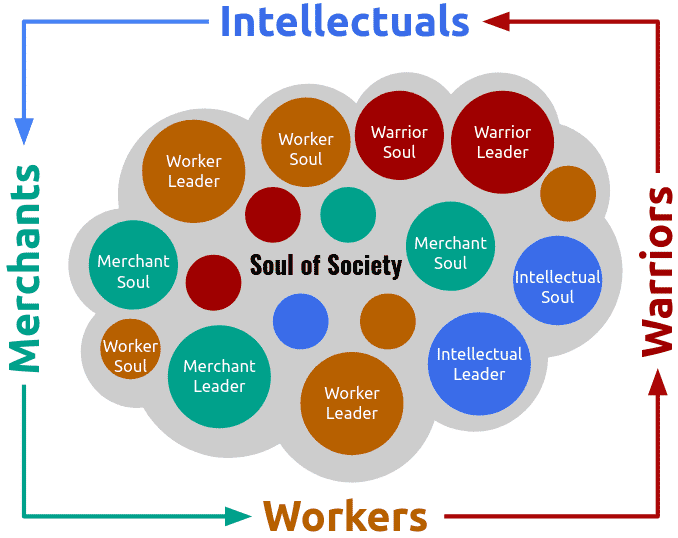 *A society is three or more entities working towards a common goal or interest. A partnership is a bit different as it needs to two entities as a minimum. Thus, a childless husband and wife is a partnership. It becomes a society after having a child. A family is a common example of a society. A basketball team is a society, different from tennis-doubles players that form a partnership. Since a team is a society, it also is subject to social cycles which manifest as winning and losing streaks.

The minds of all men are similar in their feelings and operations. No one can be actuated by any affection which others are not susceptible to. In wound-up strings, the motion of one string communicates itself to the rest. So all the affections readily pass from one person to another, and beget correspondent movements in every human creature. The Simple Treatise Of Human Nature Section 1, Part 3, Book 3
Few people ever reflect that from the evil of other men, something of evil is communicated to themselves. And so the feeling of sorrow which has gathered strength at the sight of the misfortunes of others becomes more and more difficult to repress The Simple Republic by Plato, Book 10

This flexibility lets souls send and receive invisible information via intuition. In our music analogy, the orchestra can get visual hints from the conductor to speed up the tempo or make the strings louder.

This flexible quality also lets souls merge and agree, as proven by the phrase “the meeting of minds” or “being on the same page”. This would be like an orchestra adding more instruments that jive with its style.

Matter and physical objects, on the contrary, cannot occupy the same physical ‘page’ nor meet at a ‘place’ without losing their individual identity.

We then call this merging of the minds or souls as a society. For example:

Human society began as families agreeing to work together for mutual benefit, which we call the common interest . We can say that the common interest is the conscience of the soul of society, just as a person’s own conscience represents his soul’s best interest for himself. We refrain from doing a bad thing because our conscience will implant the feeling of guilt in our minds, as a natural warning about the resulting consequence or karma.

Societies then agree and merge with other societies to form nations, which can merge to form confederations, which can finally form a global human society. Social Superphysics aims to form such a unified society by explaining the properties of the soul, as explained by Socrates, David Hume, Hinduism, Buddhism, and Taoism.

The entire human species is therefore one big society made up of all human minds. David Hume and Socrates use the analogy of citizens being the individual souls with their government as the oversoul. Quesnay uses the analogy of cells in a body. In Hinduism, this is similar to the atman (consciousness) making up the paramatman (universal collective consciousness).

If common interest naturally makes humans unite into societies, why do we see so much inequality, hate, and conflict?

The Ego Separates the Union of Souls

This confinement builds ego, which is the feeling for the self. When left unchecked, this ego leads to disagreements, disunity, and eventual conflict. The more democratic the society, the more difficult it is to maintain unity:

Rancorous and virulent factions which are inseparable from small democracies. Those factions have so frequently divided their people and disturbed the peace of their democratic governments. The Simple Wealth of Nations Book 5, Chapter 3
Are you not aware that the soul of man is immortal and imperishable? ..But reason will not allow us to believe this. It will not let us believe that the soul, in its truest nature, is full of variety, difference, and dissimilarity. The Simple Republic by Plato, Book 10
When the whole soul follows the philosophical principle and there is no division, the several parts are just. The Simple Republic by Plato, Book 9
There is something ridiculous in the expression 'master of himself' because the master is also the servant and the servant is the master since the same person is denoted. It really means that in the human soul there is a better and a worse principle. When the better has the worse under control, then a man the master of himself. When due to evil education or association, the better principle is overwhelmed by the worse principle, then the man is blamed and is called "unprincipled" or the slave of the self. The Simple Republic by Plato, Book 4

The Solution: Harness the Common Interest via Social Networkism

It would be easier to prevent the growth of ego by pointing out that no one is perfect:

Here, the common interest is implementing the right policies

Thus, the key to common interest is to group everyone according to ideas that would interest them. This would let them gravitate to it and hopefully lower their egos in order to explore that idea further.

For example, we sometimes go to Meetups about the food, technology, artists, and sports that we like. Nowadays, the internet, social networks, and messaging apps like Whatsapp, Zalo, and Viber help us to access such interests virtually.

Facebook is a Personal Network, Not a Social Network

Unfortunately, some social apps group people not to build the common interest, but merely funnel advertisements more effectively. An example is Facebook which lets its users add other users that they like, creating a personal network instead of a proper social network.

Those users can then post whatever is in their personal interest which then creates a personal bubble or echo chamber that might go against other bubbles. If left unchecked, it can lead to online conflict, followed by real physical conflict or harm.

In order to earn more from ads, some social networks focus on user quantity instead of user quality. Our system is different because it earns primarily from a tax, as Pointtax , and only secondarily from advertising.

A true social network therefore is one that encourages personal interest as long as it is within the common interest. This necessitates a regulator, just as an early society has a chieftain and a modern society has a President or Prime Minister. The key qualification of this regulator is his understanding of the common interest as to keep the society unified and whole. His whole moral authority depends on this.

Socrates’ version of the regulators are the guardians who are morally upright:

The guardians will be delivered from all these evils. Their life will be more blessed than the life of Olympic victors. The Olympic victor is happy to receive a part only of the blessedness secured to our citizens. The citizens' victory is the salvation of the State at the public cost. The crown with which they and their children have is the fulness of all that life needs.

We implement his guardians as ISAIAH which is the machine learning that will regulate our proposed social pantrynomic network which implements our concept of social networkism desribed here. Thus, social networkism is made up of the following ideas:

Next The Essentials of a Civilization