How to Restore the Gold Standard through Clearing Funds

Our proposed Multilateral Clearing system , derived from EF Schumacher and Adam Smith, can prevent currency attack and commodity speculation since:

The job of providing liquidity and transferring working capital to the producers and exporters will be done instead by clearing funds.

But how will the system work for overseas investments?

If a Japanese investor wants to invest his JPY 1b in Vietnam using the current financial system, he will convert it to USD which the Vietnamese banks will convert into VND. This would make the investment subject to USD fluctuation from speculators and currency attack. This also requires two conversions which will increase its cost.

To solve this, our clearing system will let the investor deposit his JPY 1b into the Japanese clearing fund. Let us assume that he allocates:

How can the JPY 750m be converted to VND 160b without swapping currencies? 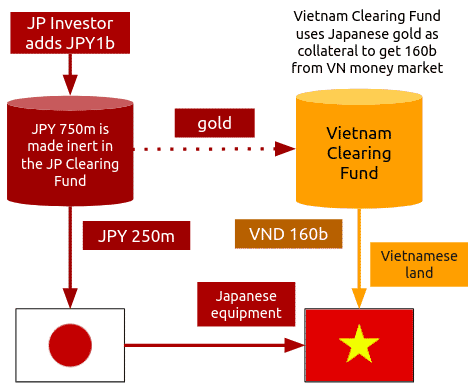 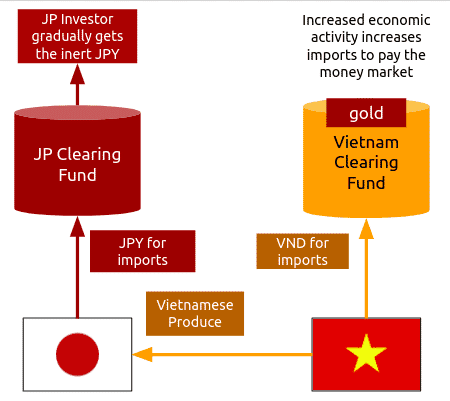 If the investment fails, then other foreign investors can add more gold to overhaul it to make it work. Alternately, the investment can be wound down and the inert JPY can be used to export Japanese products to Vietnamese investors to satisfy their claim with even the possibility of material gain, despite a monetary loss.

This clearing system is different from the current commercial system as it creates a win-win situation through the cooperation of the central banks, investors, producers, exporters, and importers. The commercial system, on the other hand, fosters no such cooperation. This is why banks with failed investments get stuck with non-performing loans which then cause financial crises.