Law of Supply and Demand Fallacy

April 7, 2019
Update: April 2021
The actual supply prices of Covid vaccines are consistent with our assertions here that the supply curve cannot be naturally vertical, and is the final proof of the sophistry of the equilibrium theory of Economics

Adam Smith’s Supply and Demand Curves (below) are the foundation our proposed science called pantrynomics which is based on Classical Economics. It can be applied to any problem in economics in order to provide common sense answers. 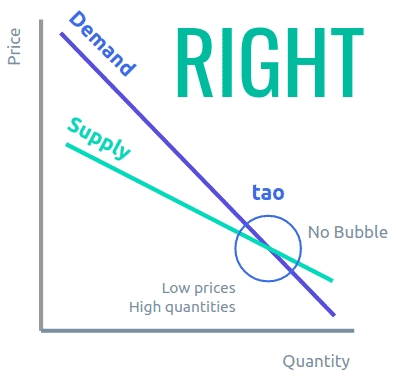 For example, the question below appears in Principles of Microeconomics by Mankiw, which teaches the unsustainable paradigm of Neoclassical Economics:

The equilibrium price of coffee mugs rose sharply last month, but the equilibrium quantity was the same as ever. Which explanations could be right? Explain your logic.

The market price of coffee mugs rose sharply last month, but the quantity supplied was the same as ever. What is the explanation?

This re-phrased question does not impose ’equilibrium,’ since it is a mercantile sophistry or a not-so-obvious-lie. We then apply Socrates’ Dialectical method in order to chase down the cause of its hypothesis. Unlike the scientific method which just gets data from perceptions, the Dialectical method gets data or inferences from the perceiver himself, which in this case is the mind of the asker.

The marginalist elastic and inelastic supply curves are an example of sophistry. This is because supply curves ultimately have a downward slope, responding to the downward demand curve. We have called this Adam Smith’s Demand Motive, which is the opposite of Say’s Law.

Thus, in the problem, people somehow are willing or made willing to buy the same coffee mug at a much higher price. In reality, this can only happen if:

Scenario 1: There was only one coffee mug supplier in the whole society.

Following the logic of the perfectly inelastic curve, that supplier merely needs to advertise its mugs to increase demand or ‘shift the demand curve to the right’. It can then steadily raise its prices as demand increases fearing no loss in demand. (The economist’s answer leads to this)

Scenario 2: There was an increased demand for that kind of coffee mug

An example is a special event for that month. Smith gives an example as a public mourning that raises the demand for black cloth. The same thing happens for flowers during Valentine’s day. But in such cases, production is increased. Since the question says production was not increased, it means the event was sudden or temporary, like rain creating a sudden demand for umbrellas on the street. Even if this were the case, competition would prevent prices from being rising arbitrarily unless there was only one umbrella supplier, which leads to the first scenario.

More realistically, the event called specifically for that kind of mug, which leads to the next scenario:

Scenario 3: That kind of coffee mug suddenly became so popular, for example through social media.

It was a new kind of mug based on a limited material. It was first sold at an introductory price to test the market. Once demand was established, the competition* among mug-makers for the limited material raised the cost, without increasing the number of such mugs in society. This increased cost then increased its natural price. Unlike the economist’s answer, the price of the mugs in this case cannot be raised to infinite heights. The pantrynomist’s answer leads to this.

*In Economics, the knowhow to make the special mugs would be monopolized by a single supplier. In pantrynomics, on the other hand, the basic intellectual property is made available to allow others to make the product and quench all demand as fast as possible.

Update: July 2021
This is consistent with Biden’s call for the intellectual property for vaccine-making to be made open.
Update: April 2021
The supply and demand for vaccines](/fallacies/economics/inelastic-supply-curve) is recent proof that a supply curve can be inelastic if the society is taught to be selfish. But such selfishness is consistent with war, as seen in World War I, II, Cold War, War on terrorism, and the recent trade war between the US and China. Why would a science teach people to wage war as a natural state?

In a free society, a product can never be “perfectly inelastic*”. Even if oil prices, for example, were raised to exorbitant prices, society will switch to coal, LPG, firewood, electric cars, public transport, bicycles, etc. through their own effort.

Even if a terminal cancer patient was sold a life-saving drug in exchange for all his life’s present and future money and assets, as to leave him only his clothes for the rest of his life (the highest possible price for his life is his life, as in pure slavery), he will likely not do the trade. Thus, it can be observed that in economics, economic slavery** is a real possibility, as seen in rising prices and in both personal and governmental debt (US fiscal cliff, Latin American debt crisis, Greek debt crisis, etc.).

*Samuelson (and Mankiw) correctly assigns elasticity to Supply, while Case and Fair assigns it to Demand. Both assign ceteris paribus or a non-changing universe which is a very obvious fallacy ** We define slavery as a regular state of control of another’s actions that produces pain. We replace the jargon ’elastic’ and ‘inelastic’ with easy-to-understand words: ‘price-sensitive’ and ‘price-insensitive’.

Looking back, we can see that Smith did mention in The Wealth of Nations that a commodity can be ‘perfectly inelastic’ if it matches the following conditions:

The first kind is the rude produce which human industry cannot multiply at all. Examples are: most rare birds and fishes, different sorts of game, and almost all wild-fowl and all birds of passage, etc. Nature produces them only in certain quantities. They are very perishable. It is impossible to accumulate together such produce of different seasons. Their demand increases with the increase in wealth and luxury. Their supply cannot increase beyond this increase of the demand. The quantity of such commodities remain the same while the competition to purchase them is continually increasing. Their price may rise to any unlimited height. Book 1, Chap 11, Digression

However, it is obvious that such goods are not only attended with immorality, but are simply illegal just as slavery is illegal. Thus, it is still consistent with the earlier conclusion.

Teaching the inelastic supply curve therefore not only teaches selfishness and war as a natural state but also the extinction of certain species.

Merging the old question with Smith’s quote can help us create a new, more realistic question below.

Updated question: The market price of Rhino horns rose in Vietnam sharply last month, but the quantity supplied was the same as ever. What is the explanation?

The natural price is the central price, to which the prices of all commodities are continually gravitating. Different accidentsmay sometimes keep them suspendeda good deal above it.. But.. they are constantly tending towards it