How Economics Leads to Crises

Supply and Demand Together

We combine both curves to come up with a Supply and Demand model.

Samuelson justifies the unnatural supply curve with buying and selling through an auctioneer scenario. This is the same sophistical technique used by Jevons and Marshall, in their attempt to justify equilibrium.

Which level will the price actually go? And how much will then be produced and consumed?.. Let us proceed what an auctioneer would do, i.e. proceed by trial and error.

This is obviously false because no one goes to a grocery store to outbid other shoppers for every potato or loaf of bread. Neither do we make bids when we get drinks from a vending machine.

From trial and error, Samuelson ends up with an equilibrium point where both curves intersect:

The equilibrium price, i.e. the only price that can last, is that at which amount willingly supplied and willingly demanded are equal. Competitive equilibrium must be at the intersection point of supply and demand curves. 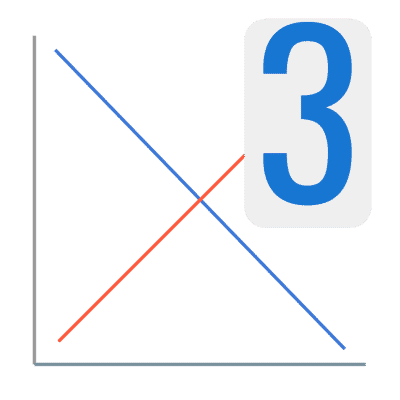 However, it is interesting to note what he says about what happens at low prices:

Can that price ($1 per bushel) persist? Again, obviously not-for a comparison of Columns (2) and (3) shows that consumption will exceed production at that price. Storehouses will begin to empty, disappointed demanders who can't get wheat will tend to bid up the too-low price. This upward pressure on P is shown by Column (4)'s rising arrow.

This is Samuelson’s second fallacy because:

In fact, there are many cases of crops being overproduced and merely dumped. If wheat falls to $1, then it means that its production was plentiful, opposite of Samuelson’s assertion that storehouses will begin to empty.

If we send £100,000 in money to Amsterdam to buy Pepper then send it to Italy, it must yield £200,000, doubling the money. If we send the £100,000 to India to buy Pepper and sell it to Italy, we can earn £700,000 gross. But where the voyages are short & the supply plentiful, the profit will be far less. If our consumption of foreign goods stays the same and our exports increased, the overbalance must return as money or foreign goods from our re-exportation, and increase our revenue more. Thomas Mun
[The forex dealer in Amsterdam who imports British coins] has the same effect as if a Dutch Merchant had carried away those coins, which he must do if Dutch goods are overbalanced which makes our money undervalued. And on the contary, when the forex dealer brings in Dutch coins into England, he does the same thing that the English Merchant does when our British commodities overbalance Dutch goods. Thomas Mun

*The principle of the balance of trade is destroyed by the fact that the US is a net importer but is rich, while China was a net exporter back in the 2000’s but was relatively much poorer. If the balance of trade were strictly enforced, then the US should have started a total trade war with China back in the 2000’s to avoid being a net importer. Similarly, equilibrium is destroyed by the fact that a poor person can buy a $1 anti-parasitic medicine (of low nominal value) which will save his life (have maximum real value). If equilibrium were strictly enforced, then the seller of the $1 medicine should raise its price to $10,000 to be in equilibrium to the future lifetime productive value of the poor man. Alternatively, the seller can auction it to raise its price above $1 and maximize profits. All these propositions are absurd.

The natural price is the lowest price that a dealer can sell his goods.. The market price is the actual price at which any commodity is commonly sold. Market prices are regulated by the proportion between the quantity to be sold and the demand of buyers willing to pay the natural price.
When the commodities fall short of the effectual demand, the shortage will cause some of the buyers give more for those few commodities. This will create a competition among buyers which will raise the market price. When the amount sold exceeds the effectual demand, the excess will remain unsold. To dispose of it, it must be sold to those who are willing to pay less.

*Instead of profit maximization as producer’s surplus, buyers are interested in bargains as consumer’s surplus 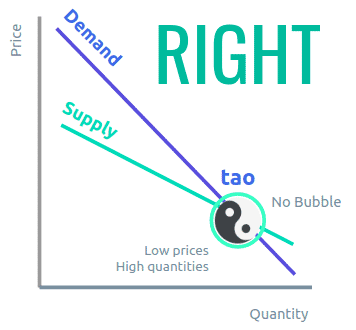 Unlike the curves of the manufacturer and merchant, Smith’s curves slope downwards to create low prices because it views economic activity as ultimately for the demanders or consumers, and not for the suppliers or sellers.

As you can see in the chart above, the sweet spot of the natural supply and demand is on the lower right section, representing high quantities at low prices.

However, the profit maximization doctrine of Economics teaches that supply must be reduced so that prices will rise. Rather, competition should be stifled in order to preserve one’s monopoly position for the sake of guaranteeing high profits for the investors.

The resulting high prices and low supply then contradict the goal of economic growth, especially after bubbles and financial crises. Economists try to save face by saying that perfect competition is needed for it to work. But they do not realize that their supply curve makes perfect competition impossible in the first place. Because of this, ‘real equilibrium’ is never achieved despite the best efforts of economists and governments.

When a potter becomes rich he will not think of you as much as before, grow more and more indolent and careless, and become a worse potter. But, on the other hand, if he has no money, he cannot provide himself with tools or instruments, he will not work well, and he will not teach his sons or apprentices to work well. Then, under the influence either of poverty or of wealth, workers can degenerate. Here, then, is a discovery of new evils of wealth and poverty, against which the guardians will have to watch, or they will creep into the city unobserved. Wealth is the parent of luxury and indolence. Poverty is the parent of meanness and viciousness. Both are parents of discontent.

Adam Smith specifically pointed to the selfish-interests of traders, manufacturers, and financiers as the origin of the concept of market equilibrium:

The proposal of any new commercial law which comes from this order, should always be listened to with great precaution.It should never be adopted until after long and careful examination with the most scrupulous and the most suspicious attention.
Update: Update July 2021
The actual supply and demand of vaccines](/fallacies/economics/inelastic-supply-curve) is the final proof of the sophistry of market equilibrium

The solution is a new paradigm that values all of society:

By exposing the sophistical ideas such as equilibrium and profit maximization, we can say that Economics from the 1870’s is actually a corrupt science, and not merely a dismal one. It descended directly from Mercantilism which caused so much suffering in the colonies in Asia, Africa, and the Americas, and is still creating suffering nowadays through inequality, high prices, college debt, high taxes, etc.

Rather than reform a system with a corrupt base, it would be better to take its data and findings, and transplant them onto a new and proper one that is in line with the interests of society and human life.

For this reason, we introduce alternatives to every major economic concept as the foundation of Pantrynomics:

Superphysics
Back to Equilibrium-fallacy
Next Supply Demand Fallacy