The Relativity Of Simultaneity

A very long train travels with the constant velocity v. 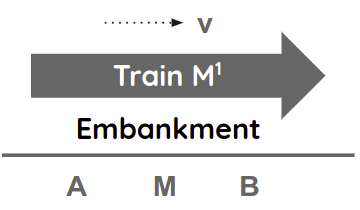 People in this train will use the train as a rigid viewpoint for all events relative to the train.

The light arriving at A and B meet each other at the mid-point M of the embankment. But the events A and B also correspond to positions A and B on the train.

M' is the mid-point of the train. When the lightning strikes, M' naturally coincides with the M. But it moves forwards according to the train’s velocity v.

Before my theory of relativity, physicists assumed that time had an absolute significance*, i.e. that it is independent of the motion of the body of reference.

But this assumption is incompatible with the most natural definition of simultaneity. If we discard this assumption, then the conflict between the law of the propagation of light in a vacuum and the principle of relativity (in Section 7) disappears.

But this leads us to conflict with Section 6 [the adding of velocities]. This is because the man in the train is moving forward at a distance w per second with the train. But, according to this section, the time of an event in the train from the train’s viewpoint is not equal to the timespan of the same event viewed from the embankment (as reference-body).

Hence, from the viewpoint of the embankment, the walking man does not travel at the same speed as when viewed from inside the train.