Math for Qualities and Ratios

Superphysics is based on waves which need linear algebra to notate and compute. Moverover, no wave exists alone - all waves and even parts of the same wave are analogous or relative to another. This is different from particles which are discrete and can exist all alone.

An example of a ‘particle-based’ equation is Newton’s second law:

An example of a ‘wave-based’ equation is that of Maxwell:

Such equations are common in linear algebra which might be too complicated for most people. The problem is that pure math is quantitative in nature and not qualitative. Because of this, everything has to be defined beforehand. It’s easy to know what is meant by F m a, but it’s harder to know what dℓ ∮B μ0 I ddt ε0∫E dA mean.

The problem is that the processes such as dℓ must accommodate numerical variables* such as dA in order to come up with a result, as a number. This requires all of the processes to be known. If one is wrong, then the answer is automatically wrong.

*The variables represent shortcuts which then come from a quality of convenience which come from the laziness or staticity of mind. 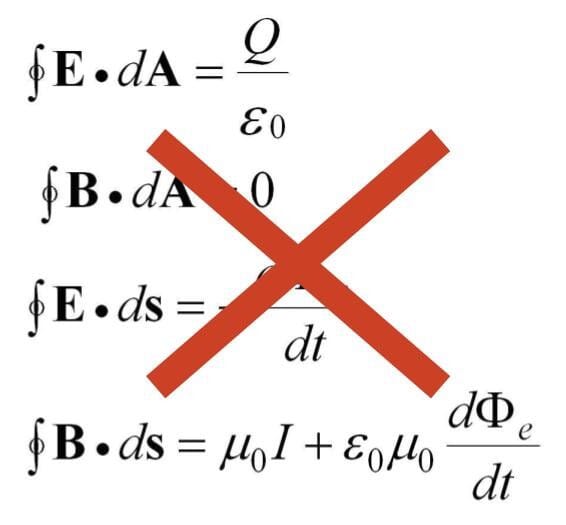 Modern algebra has so many certain rules and formulas that it is full of confusion and obscurity that embarrasses instead of cultivating the mind.

To get around this shortage, we will use the qualitative aspects of waves that combines its qualities such as amplitude, oscillation, vector, wavelength, etc. For example, in Wave 1 + Wave 2 = Wave 3, we assign qualities instead of numbers and processes so we can arrive at the general outcome faster.

The + and = represent the natural operations of the human mind. The minds of less advanced species, such as penguins, might be capable of + and -, but are not capable of * or /. Likewise, human minds are limited to = and do not dwell so much on : or on its variations.

Since it deals with qualities instead of quantities, we can call it Decon Notation and its underlying system as Quali-math. This also solves measurement problems by allowing anyone to create a subjective measure.

Then we can create equations:

This can then be “translated” into any language*:

*This is important because Superphysics uses many non-English words like aether, monad, jiva, atman, bhuta, guna, chi, wu-xing, etc. In fact, we propose an overhaul of English, as Lish, to make it more intuitive. For example, add ’s’ to pluralize nouns so that oxs, datas, childs would be correct.

A sample implementation is our use of “male and female” charges for particles instead of the “positive and negative” used by Benjamin Franklin. In theory, this would lead to new chemical compounds that are unthinkable in Physics.

This quali-math will make the most sense when you think of a spaceship using quantum teleportation that not only will use 2D space as in a car on Earth or a 3D space like an aircraft, but a space with four or five dimensions as time-multiverses and alternative universes, where normal math breaks down.

For example, 1 + 1 = 2 might be true for this universe, but it might not be true for a different universe where 1 + 1 = 1 or where the conception of two ideas automatically merges them into one idea. In such a universe, it is the mind that splits itself into different perception-units in order to create the idea of numbers. This is the opposite in our universe, where the perceiving entity is one, and the it is the observed entities that are multiples and discrete.

To account for this mind-splitting behavior, we propose a new notation using flexible colons instead of the rigid equals sign. The former represents the flexible nature of the universe as opposed to its strict rigidity as the latter. 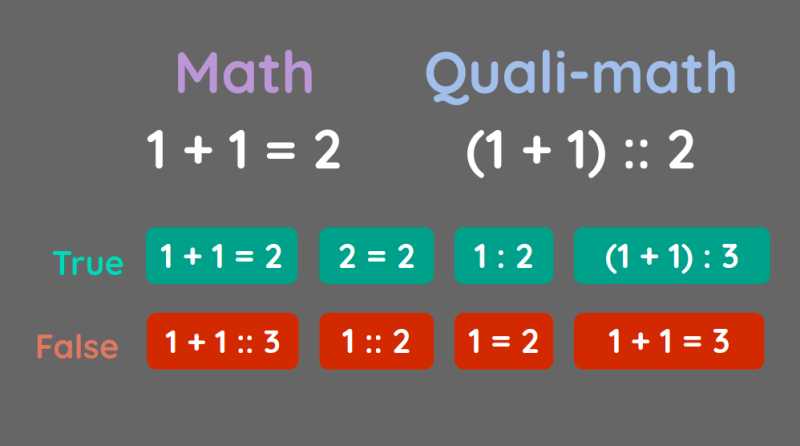 We can think of the double colon as a rigid equals sign, while the single colon as a flexible ratio. This ratio represents our theory of “universal relativity*” which is represented in reality by gravitational relativity , among others.

*All philosophers say that everything is connected, even the sophistical pseudo-philosopher John Stuart Mill. The ratio sign signifies this connection. In this way, we can say that the universe is an unending chain of multiple layered ratios, as a matrix, where a change in one part causes a change in the whole universe as a chain-effect. The lower dimensions like ours has more rigid ratios that lead to discrete and ‘hardened’ identities, while higher dimensions have more flexible ratios that lead to more malleable ones.

Update: March 10, 2022
An example of the “hardness” of this dimension is the hardness of will of Russia in invading Ukraine and in Ukraine stubbornly not giving up, not caring about the chain-reaction that it causes to other nations and the planet. In a better universe (with qualimath as the norm), Russia, Ukraine, and NATO will “soften” their minds and egos (less strong force, more gravitational force) as to harmonize with each other, being more sensible how their actions affect the planet.

*This idea was developed by Adam Smith who criticized the sophistical math of the mercantile system. Such sophistry now manifests as the strict demand for GDP growth by Economics which is currently causing mass exctinction and conflicts.

In this way, the formula of economist John Maynard Keynes for money supply M as being affected by liquidity preference L and interest rate r

Notice how this isolates Newton’s G away from the two masses being compared. In price equations, this will allow us to more easily remove the influence of interest rates (of the financial system) and taxes (of the government) in order to reveal the natural price ratios from their own perspective. The gravity, interest rates, and taxes enter their own abstraction called a limiter. Moreover, this system does not require PEMDAS.

We then deconstruct it further:

The above decontstructed equation gives us two benefits:

Quali-math is inspired by Al-Khwarizmi who invented algebra from his work on “Calculation by Completion and Balancing”.

The practical purpose leads to algorithms, the invention of which has likewise been attributed to Al-Khwarizmi*. This is important because automated intelligence is one of the goals of Superphysics.

*The original purpose of Algebra (Al-Jebra or ’the repair or healing’) was to divide an estate and compute the inheritance due to each heir. This matches the problem-solving nature of Superphysics. This is opposite of Einstein’s math as sophistical tensors coming from his wild imagination which creates more problems. It is also different from Newton’s Calculus which originated from plotting curvilinear motion. Superphysics allows teleportation which totally negates curvilinear motion.

An AI-driven* ship in our universe that teleports into another universe with different physics rules can transpose its logic and definitions more easily to match that universe. This is because it uses quality instead of quantity.

A qualitative definition in one’s mind retains itself even if its mind moves into another universe. This is because that defintion is always anchored in the ego (feeling of the self) of that mind. This was implied by Adam Smith:

I can only fairly compare those big objects and the small objects near me by transporting myself in fancy, to a place from where I can survey both at equal distances, and judge their real proportions. Theory of Moral Sentiments

Because of this, quali-math also creates moral effects. It conditions minds to respect the identity and natures of all sides (other egos), instead of bulldozing over them with arbitrary notations and movement towards one side or result as what Westerners tend to do.

*We extend the Cartesian plane into two: a physical one and a metaphysical one

Superphysics
Back to what-is-isaiah
Next Socratic dialectics