How to Restore its Fixed Capital and End the Inflation

How to Fix Venezuela 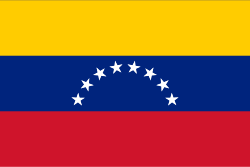 The DCTI tool can diagnose the economic health of societies according the maxims of Adam Smith.

A society, whether it be a family, corporation, or country, is wealthy if its productivity or value produced exceeds its own demand or value needed. This productivity is shown in the “Industry” column below, while the demand is shown in the “Demand” column. A society is wealthy if its Industry bars are higher than its Demand bars and poor if it is lower. 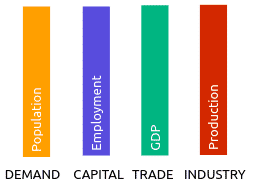 Societal industry is dependent on capital and circulated by trade. Capital is anything that produces value via Industry while Trade is any exchange of the valuable produce of that Industry.

We start our analysis at 1999 when Chavez came to power and before his policies were fully implemented. We compare this to 2013, the year which has the latest data and when his policies have had its full effect. We include 2007, as the middle point between the two years to establish a basic trend.

The reason is that oil prices rose in 2013. The increase in the value of oil exports led to Venezuela consuming so much more. Ideally, this consumption would be fed by native industry which would then spur an increase in capital and investments. However, we see that both capital and industry declined. This implies a restructuring of the economy was done between 1999 and 2007 that led to a reduction in native capital and an overreliance on imports.

We need to find out the specific policy changes in that time period that led to the decline in industry in 2013. The two main culprits are:

In a socialist effort to redistribute wealth to the poor, Chavez nationalized many industries and redistributed land to people who were not skilled in making them productive. From productive people, such assets went to bureaucrats and rent-seekers whose main skill is to gain favor and popular support. We see that this has the biggest impact of all. In fact, price controls were merely the effect of nationalizations. While price controls hinder the natural price, expropriations destroy the real price by giving the tools for production to those who are not able to produce. This violates the invisible hand of the Tao which manifests as non-farmers getting the lands of expert farmers, for example, which then naturally leads to fewer crops.

How Venezuela Lost Its Fixed Capital

The currency controls of 2002 and price controls of 2003 were enacted as responses to inflation. This is then a sign that low productivity existed even before 2002. We see that the cause of this low productivity is Hugo Chavez enacting 49 reform laws on November 2001 which were not approved by the National Assembly. Those reform laws were then prompted by the recession prior to 1999, which is beyond the scope of our analysis.

The most impactful of these laws introduced reforms on land and the oil industry which suddenly and forcibly transferred their ownership from productive private hands to the control of the government which is not an expert in any of them (since Chavez’ expertise is the military).

This violates Adam Smith’s rule that only governments skilled in commercial projects can be in business (such as modern China’s state-owned corporations), and that any big change should be implemented gradually. The immediate effect was a sudden drop in industrial production from $174b in 2001 to $131b in 2003. Production then rose back above its 2001 level in 2005.

The ownership of fixed capital (land, machines, factories) was transferred from those who had the skills and experience to produce, to those who had less or no skills to produce. This led to low production which led to inflation which in turn was aggravated with controls and more expropriation leading to a vicious cycle creating lesser productivity.

Ideally, even those without skills to produce can eventually learn to raise production. However, the controls made this extremely difficult. With every expropriation, production dropped sharply. A single big company or farm has many smaller companies which rely on it through its supply chain. This huge loss of productivity trickled down the chain to eventually wipe out those smaller companies, leading to more drops in industrial production, from $227b in 2008, to $195b in 2010.

The underlying cause of the controls and nationalizations implemented by Chavez is the South American concept of the “caudillo” which best translates into “benevolent dictator”. Although this approach has its benefits in the short term, in the long term it must give way to a mature democracy otherwise it will lead to rent-seeking and corruption, which is very common in South America.

The first step in solving Venezuela’s economic problems therefore is for the government to gradually transition itself from being an economic controller to an economic regulator. This means letting Venezuelans control their own economic destiny and follow their dharma or tao, with the government being in the background enforcing security, justice, and maintaining essential plans, works, and services.

Bringing back the land and nationalized companies to their former productive owners is the first step to increasing Venezuela’s capital. After the owners’ rights are secured, they will bring back their skilled manpower and can access credit from international investors (assuming that sanctions will be lifted). This productive capital will then be the basis of a rejuvenated Venezuela, instead of the current popular support which is not so productive.

After the production is restored, the most burdensome controls can be eliminated gradually. This is to be done in phases to protect the people from price shocks. Smith advises that wrong policies should be mended gradually, as any big, sudden change can do more damage in the short run:

It may be deliberated how to properly restore the free importation after it has been interrupted, especially when its local monopoly already employs so many people. Humanity in this case may require that this freedom be restored only by slow gradations and with much reserve and circumspection. Were those prohibitions taken away all at once, cheaper foreign goods might enter so fast as to deprive our people of their employment. The Simple Wealth of Nations, Book 4, Chapter 2

Economic controls, whether for prices, currencies, or imports should be added and removed gradually. For example, the government can set a date, such as June 2015, when most price controls will be 100% eliminated. This can be phased out by letting prices rise 16% each month until it has risen to the market price.

For example, if the market price of bread is $1 but controlled to $0.50, its price will be allowed to rise per month as follows:

Only the weakest in society, such as senior citizens and the disabled, will enjoy controlled prices, significantly reducing the enforcement burden on the government. A phased approach will prevent hoarding especially if the price increases are done in a weekly or even daily basis, as the changes will be very small. Of course, the government can choose how long this phase out process should be so as not to create unrest.

The number of producers will increase each month as prices rise and the competition of the producers will prevent prices from going beyond the estimated market price. The main duty of government in this phase is to ensure that no single company is large enough to control prices, otherwise, the oppressive control will merely transfer from the government to that single company or cartel.

The gradual elimination of price controls will cause previously hoarded goods to be gradually released back to the market. This is because those hoarded goods will provide no profit after goods start to become more abundant, as explained by Smith:

The corn merchant, from excessive avarice, might raise corn prices higher than needed. He is likely to suffer the most by this excess of avarice because he must sell his leftover corn at a loss if the next season proves abundant. The Simple Wealth of Nations, Book 4, Chapter 5

Sharp drops in production were caused by nationalizations beginning in 2001. This rippled through the supply chain, causing small suppliers to close down. Although the nationalized companies were able to recover production, their supporting supply chain could not. This then dragged the production down as a whole in the long run.

Price controls were then enacted in 2003 to stop this price inflation in goods. This then increased the cost of getting such goods to the point that the new Venezuelan producers could no longer produce as planned.

In the end, only those companies supported by the government could do the production. However, since the expertise of Chavez is the military arts and not manufacturing nor industrial agriculture, those companies could not produce much (unlike China’s state-owned corporations for example). This led to the current spiral of low production and poverty within a short span of time.

To solve these causes, the following solutions are proposed:

Superphysics
Back to US
Next how-to-fix-afghanistan