The Way of Structural Reform

How to fix Japan: Why Abenomics and Keynesian Economics Failed

Japan has been suffering from chronic deflation since 1991 after the bursting of their asset price bubble. This is similar in pattern to the secular stagnation in the US after the 2008 Financial Crisis. Both problems persist because they have been given the wrong solutions in the form of “quantitative easing” (QE) in the US, and “Abenomics” in Japan.

Abenomics is a set of economic policies organized into three arrows:

This pumps money into the private sector (microeconomy) so that businesses will employ people. This does not always work since microeconomics only uses labor if there is something profitable to employ that labor on.

An advanced economy will have so much competition and so many products which will reduce margins and discourage further investment. As such, this situation merely keeps the money stuck in money markets and even makes it go overseas.

An easy proof is the Vision Fund of Softbank which invests in non-Japanese companies like WeWork and Uber, and the huge overseas investments by Japanese banks before and after the pandemic

The profit maximization doctrine of microeconomics prevents businesses from hiring people even when money is available (since that money might not return with profits).

However, this method raises public debt, increases the risk of credit downgrade, and transfers the present burden to future generations who will be born with so many taxes to pay. These will manifest as inflated prices and deflated real wages which prevent them from enjoying the life that the previous generation had.

For example, the previous generation never had to deal with supertyphoons, pandemics, and the permanently hot weather that they unknowingly created for the current generation. Rather, they knew about it but just didn’t care.

the ruinous practice of perpetual funding puts off the liberation of the public revenue from a fixed period to an indefinite period, never likely to come. However, it raises more money than the old practice of anticipation. When men became familiar with funding, it became universally preferred to anticipation during great state exigencies. Relieving the present exigency is always the object of government. The future liberation of the public revenue they leave to the care of posterity.

The Simple Wealth of Nations Book 5

To support the two arrows, the Japanese government had planned additional policies such as:

However, these were not given as much focus as the first two arrows, leading to their incomplete implementation and subsequent failure.

The failure of structural reforms is a sign that the influence of corporate Japan is still very strong. Using social cycle theory, we can make analogies between ancient and modern Japan:

Sir Robert Walpole tried to establish an excise scheme on wine and tobacco similar to my proposal. The bill with those two commodities was then brought into Parliament. It was supposed to be an introduction of a more extensive scheme of the same kind. Faction and smuggling merchants raised a violent and unjust clamour against that bill. The minister dropped it. None of his successors dared to resume the project from fear of exciting another clamour. The Simple Wealth of Nations Book 5

The Problem with Keynes

The dominance of the daimyos over the shogun leads to a solution that does not work on the problem, but rather helps the daimyos . Politically, Japan needs a modern Tokugawa Iyeyasu to make structural reform a priority. Without such reform, Japan’s stagnation will only continue. 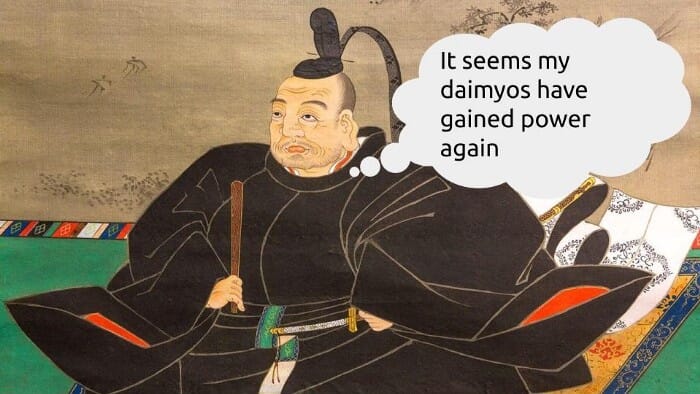 After a modern Tokugawa quells his daimyos, the question then becomes: what policies should be implemented?

From the failure of Abenomics it’s obvious that the policy should not be Keynesian. From the prioritization of the arrows, you can see the dominance of money in making up the first two goals. The dominance of money is also present in Keynes’ General Theory. In fact, the three arrows of Abenomics looks as though someone copy-pasted Keynes onto an economic policy plan:

The problem is that Keynes’ work was tailored for a depression, but Japan’s problem is a deflation. It’s like taking cough syrup to treat back pain. A depression is caused by the lack of circulation of money and that’s why Keynes wrote a lot about how to make money circulate again. We then pointed out that the lack of circulation in the 1930’s was caused by profit maximization from the Marginal Revolution of the 1870’s.

A deflation is caused by a population that is ageing or declining. No matter how much money you throw at an old man, his productivity and consumption will never improve to be like that of a young man. The best solution* is to get more young men into the economy .

*Some Japanese have pointed out that Japanese cities like Tokyo are already overpopulated and cannot handle any more humans. They do not realize that the overcrowding is the natural result of commercialization wherein humans compete for the money from profit-earners, concentrated in one place. Pantrynomics advocates balanced urban-rural development through the effort theory of value

The US, Canada, Australia, and Singapore avoid deflation by regularly getting new immigrants. But Japan has what I call a ‘Late Ming mentality’ of closing off foreign people and ideas, which leads to their current deflation problem. A recent example is Carlos Ghosn being closed off from Nissan.

Instead of three arrows, Abenomics really only needed one arrow of structural reform and should have focused its energies on that. The policies of John Maynard Keynes solve problems by transferring it to others, such as to public debt, and are really just workarounds.

It is Adam Smith, a historian and moral philosopher, who is the expert in total reform. He would likely advocate that Japan, South Korea, and China-Taiwan (depending on political climate) create an East Asia free trade zone with free immigration similar to the EU. This is similar to how he advocated a fair union between England, Wales, Scotland, and Ireland.

An East Asia union would solve:

Pantrynomics proposes a multilateral clearing system to go with this free trade zone to further unify the participating countries.

Generally, Smith’s policies would be somewhere between Singapore and China where the government has strong control in specific areas, but allows freedom in the rest. It is based on morality, specifically as fellow-feeling.

In contrast, Keynes’ policies are based on animal spirits, which explains the current inequality where the 1% are the ‘fittest’ of our species. Those spirits enshrine selfish-interest as liberalism, libertarianism, American conservatism, and laissez faire.

Superphysics
Back to Israel
Next myanmar