A Tool to Classify Human Ideologies

A lot of people confuse socialism, left wing, democracy, and communism with each other. This is because ideas from one generation are commonly usurped by later generations according to their different experiences, rather than creating new names for new ideas arising from those new experiences. People use their ‘smartphones’ more for watching movies, playing games, or text-chatting, instead of talking via voice as what a telephone would do. Nowadays, smartphones are more properly called mobile devices.

David Hume explained that such naming mistakes are caused by the mind always choosing the mental processes that expend the least energy — it tries to connect ideas and form new ones without thinking. Thus, the phone became smart and so it was called a smartphone.

In politics, this is commonly seen in the confusion between democracy and socialism.

Democracy first appeared in ancient Greece and was defined by Socrates* as a system where people could vote on everything.

*Another problem is the word ‘oligarchy’. Socrates originally used it to mean rule through money. However, modern dictionaries wrongly define oligarchy as ‘rule of the few’. But tyranny, timocracy, and aristocracy are all ruled by a few people, and so the dictionary defintion is useless. What the dictionary staff probably did was simply to use the literal meaning of oligarchy as ὀλίγος or ’the few’, not knowing that Socrates only used it to differentiate it from ‘demos’ or ’the many’.

Socialism first appeared in the 19th century from the French economists Henri de Saint-Simon as an alternative to the unregulated freedom after the French Revolution destroyed the power of the monarchy and the church:

*After the French Revolution, the aristocrats were lumped into a term called ‘capitalists’ because of the industrial revolution. Our other post explains why even the modern word ‘capitalist’ is wrong because it originally meant profit-earners, which include farmers and peddlers. The classical term for modern capitalism is “stock-jobbing” which emphasizes the growth of paper stock price. Thus, Neo-classical Economics should be more accurately named as ‘Paper Mercantilism’ and Capitalism as ‘Stock-Paper Mercantilism’ as its subset.

Thus, the peasants were split into two:

The problem then began when Marx and Engels hijacked the socialism concept and diverted it into Communism – a class-less utopia where there is no freedom (rather, freedom is sacrificed in order to attain utopia). This led to the three branches:

This corruption of the word ‘socialism’, to mean not having private property, was continued by Lenin who was released by the Germans into Russia. This then established the corrupt version of socialism as the United Soviet Socialist Republic, which really should’ve been the United Soviet Communist Republic.

The USSR should’ve been the USCR.

Because of Marx and Engels, socialism has since been defined to be the same as communism, very different from the socialism of the French Revolution.

But the Cold war is more recent than the French Revolution, so it would be naive to hope that everyone can go back to the original French definition

As a workaround, we’ve created a new term called social networkism to bring back the original French idea (social) which can manifest as a social network (networkism). It distances itself from anarchism or laissez-faire liberalism by espousing the unity of society over the unity of the self*.

*Recall that, in our system, a person has 3 billion selves.

When systematized as a government, it becomes a ‘social network republic’ which we shorten to ‘social republic’ so that countries will be named ‘The Social Republic of Wakanda’ for example. This idea remains true to Socrates’ Republic and the French Revolution which defined socialism to be in-between anarchism and monarchy, while clearly having private property.

Thus, a social republic unifies left and right wing into a single harmony* that alternates in leadership, while balancing personal freedom and state control.

*Western universities shallowly interpret Socrates’ musical advocacy as referring to audible music. In reality, his music refers to the symphony of feelings, whether of humans, animals, or the universe itself. This makes him consistent with the Asian philosophers who pushed for harmony with the Tao or dharma.

While this solves such a problem for this generation, future generations might hijack and usurp these repaired ideas and render them messed up as usual. To prevent this, we created an Ideology Matrix which classifies every socio-economic-political idea that can be possibly generated by the human mind.

It combines David Hume’s work which explained the dynamics of the mind, with Socrates’ cycles of democracy, tyranny, aristocracy, and oligarchy that matches the four castes of Eastern shudras, ksatriyas, brahmins, and vaeshyas. By doing so, we unify eastern and western metaphysics and show that both had the same core observations of human society and the human species, but using different terminologies. 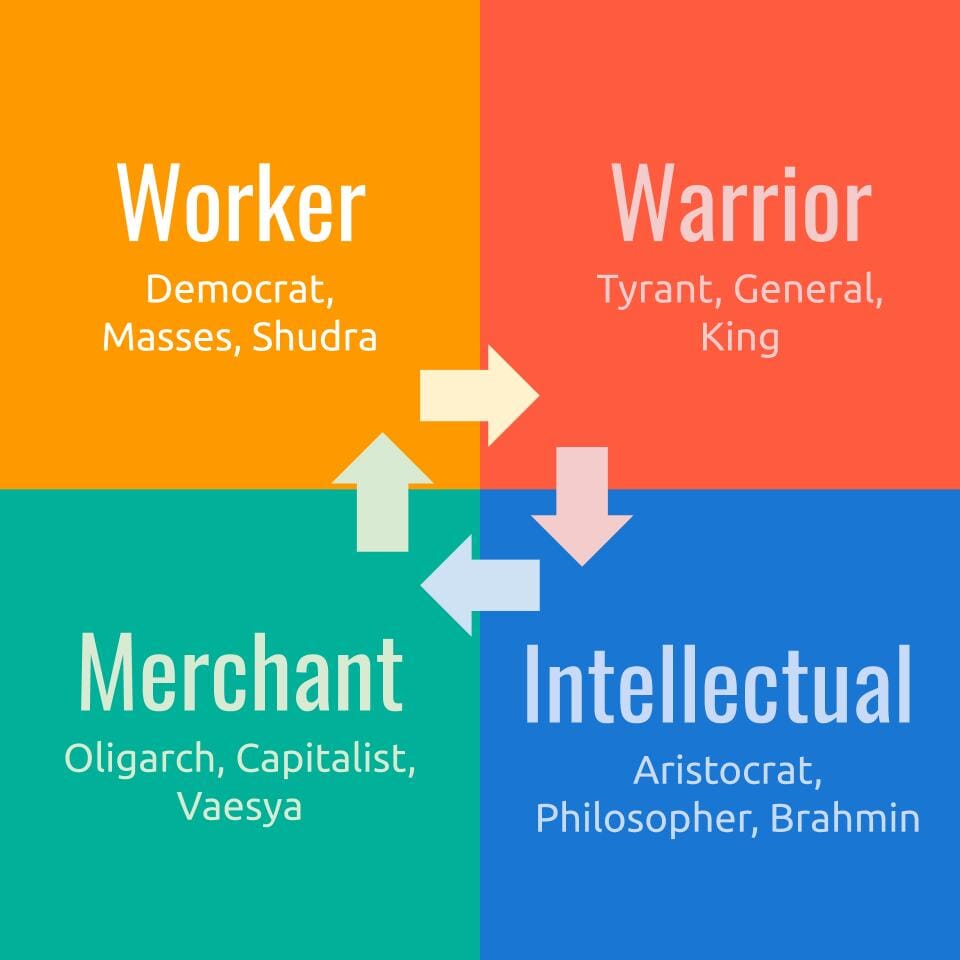 The four governments are those of Crete and Sparta, which are generally applauded. Oligarchy comes next; this is not equally approved. It is a form of government which teems with evils. Democracy, which naturally follows oligarchy, although very different. Lastly comes tyranny, great and famous, which differs from them all and is the fourth and worst State. The Republic, Book 8

It’s a 3D matrix that classifies ideas based on three axes: 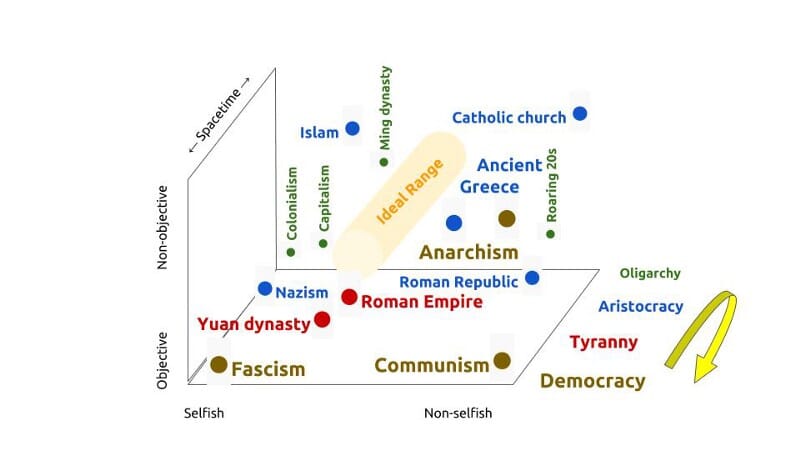 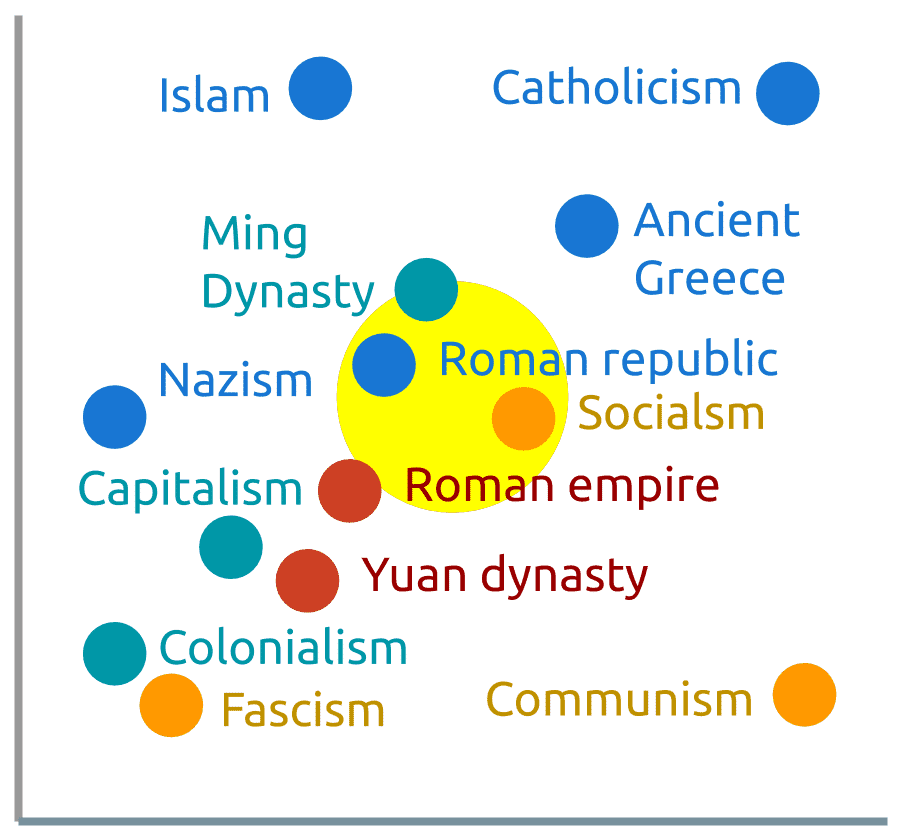 By plotting their core ideas in our matrix, it is easier to see how different Socialism is from Communism.

The ideas then progress in a cyclical way from democracy to oligarchy, then back to democracy. For example:

In America, this can be seen in:

The most sustainable political philosophies and economic systems are those that are near the center, which balance non-selfishness and objective-ness, while adapting to changes in the social cycles.

In Buddhism, this is called the Middle Way and is essential to sustainable happiness.

The ideology matrix is an essential part of Social Superphysics as it will help advance beliefs and ideologies that are near the center, yet flexible enough to fit the current cycle of the country where it will be implemented. This will make it global yet local at the same time. It is implemented as one of the features of ISAIAH Match which is our machine learning platform.

Superphysics
Back to Socratic-dialectics
Next What's automated intelligence?