We are moving our site to https://superphysics.org. Please update your bookmarks accordingly. Thanks!
The resources branch deals with sourcing and allocating resources

The Fourth Branch of Government

Ever since the French Revolution, there have been three branches of government:

This is why, although there might be legal justice, there is little avenue for political or economic justice. This is seen in the election of corrupt officials and in the presence of economic inequalities.

To complete the proper system of government, pantrynomics proposes a Resource branch to be the fourth independent branch of government. This will mimic the role of a housewife in budgeting the family’s expenses and in noting down the needs and condition of each child, which represents each citizen or group of citizens.

At the moment, such responsibilities are done by the Audit and Budget department or Treasuries of governments. These are usually as a separate statutory body or constitutional commission, which merely acts as an appendage instead of being an equal to the three branches.

The main duties or the resources branch will be:

The resources branch takes away some of the motherly duties such as caring for the poor and arranging for the logistics of supplies, away from the father, or the executive. In this way, the father can focus on more important things. This branch is independent like the others. But while the executive and legislative are elected, the manpower for the judicial and resource branches are sourced from law schools and accounting or econometrics schools.

The British Exchequer is similar to the resources branch:

The present revenues consist chiefly of.. the funds mortgaged for paying off the public debts. Examples are taxes on salt, beer, malt, etc., levied by the officers of custom and excise. These cannot be touched by the king as they are paid to the court of exchequer. The exchequer is generally managed by people of interest and integrity. They have their offices for life and are quite independent of the king. They can pay only to those appointed by parliament. The simple-lectures-on-jurisprudence

In the current system:

In the proposed system: 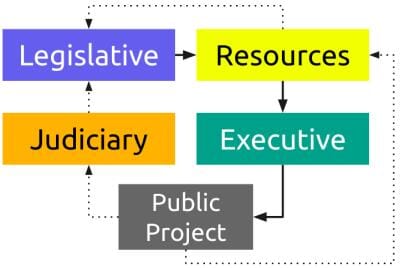 This will ensure that every budget is realistic and every project or service can be implemented within the planned period. In the current system, many projects are delayed or not implemented because the budget is only good on paper.

How It Could Have Been Implemented

As a historical example, let us put ourselves in the American Revolution in 1777 at Valley Forge.

At that time, George Washington (executive branch), could not get food for his troops because the expertise of Congress (legislative branch) was lawmaking and not logistics. A resource branch of government would’ve mapped the resources available in the colonies in advance and then relay the information to the executive for collection. Any injustice committed would then be tried by the judicial branch.

The idea for this branch came up while planning out the implementation of our new economic system in an actual society. Since we don’t have much manpower, we tried to automate, or at least make the system automate-able in the future. The resources needed to run the system have to be used as efficiently as possible without an expensive adminstrative system. Thus, the idea for an automate-able resource branch came about, which will have its genesis as the resource banking system (which we call points banking) used to safeguard all transactions.