The Conscience of Society

What is the Common Interest?

A soul manifests in the physical dimension through a physical body which can be thought of as its vehicle. To maintain itself, the soul develops two things:

Souls can then bind themselves into a new entity called a society which gets its own soul from the individual souls that make it up. This soul-of-society also acquires its own conscience, known as the common interest, that it uses to regulate the individual egos that are contained in it. This interest is based on feelings or the heart, as a feeling-sense, and not on the intellect or the brain. This sense leads to social morals to guide each individual soul on what is right and wrong.

States are not made of 'oak and rock.' They are made out of the human natures which are in them. These, in a figure, turn the scale and draw other things after them. If the constitutions of States are five, the dispositions of individual minds will also be five.

Like any sense, it has to be trained and practiced in order for it to be more effective. We can train our children to have an eye for details or to learn the notes in music. A lot of peace and progress can therefore be achieved if everyone were trained in the proper morals.

Without such morals, each soul will act arbitrarily according to its own selfish-interest. This usually infringes on the happiness of other souls leading to unsocial and unjust behavior such as discord and crime. If kept uncorrected, these lead to disorder, or even revolution.

Justice to the Rescue

To reduce the pain and unhappiness from such disorders, humans developed the concept of justice which is really the dharma of society, just as good health is the dharma of a human body. We this, we can make an analogy that injustice is the disease of society, just as revolution is its death. Rebels and terrorists are cancers and viruses, while social events are exercise and good education is proper food. The lawmakers are the doctors, while courts are the therapists. 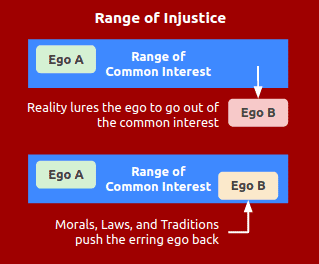 The justice system pushes the erring ego back to the common interest just as the our conscience (sense of personal morals) makes our minds refrain from doing bad actions.

..beneficence is less essential to society's existence than justice. Society may subsist without beneficence, though not in the most comfortable state. But the prevalence of injustice must utterly destroy it. Theory of Moral Sentiments, Part 2, Section 2, Chapter 3