The Story of Er

I will tell you of the heroic tale of Er the son of Armenius, a Pamphylian by birth.

He was slain in battle. Ten days later when the bodies of the dead are decomposing, his body was found unaffected by decay. It was carried home to be buried.

On the 12th day, as he was lying on the funeral pile, he returned to life and told them what he had seen in the other world.

He said that when his soul left the body, he went on a journey with a great company. They came to a mysterious place where there were two openings in the earth, near together. Above them were two other openings in the heaven above.

In the intermediate space, there were judges seated. After they had given judgment on them and had bound their sentences in front of them:

Their sentences also bore the symbols of their deeds, fastened on their backs. They told him to hear and see all that was there and that he was to be the messenger to carry the report of the other world to men.

The summary of the long story is that Er said that for every wrong which they had done to anyone, they suffered tenfold* or once in 100 years.

*Superphysics Note: This is the concept of karma in Hinduism

For example, they received punishment 10 times over for each offence such as:

The rewards of beneficence, justice, and holiness were in the same proportion. He also said about young children dying almost as soon as they were born.

There were other rewards and punishments far greater which he describe for piety and impiety to gods and parents, and murderers.

The Tyrant in the Afterlife

Ardiaeus lived 1,000 years before the time of Er.

One of the spirits asked another, ‘Where is Ardiaeus the Great?’

The other answered: ‘He will never come.’

‘We were at the mouth of the cavern, having completed all our experiences. We were about to re-ascend, when suddenly Ardiaeus and several tyrants and criminals appeared. They were just about to return into the upper world.

But the mouth gave a roar instead of admitting them, whenever any of these incurable sinners, or some one who had not been sufficiently punished, tried to ascend.

Then, wild fiery men heard the sound and seized them, binding Ardiaeus and others by head, foot, and hand. They threw them down and flayed them with scourges, and dragged them along the road at the side, carding them on thorns like wool. They declared to the passers-by their crimes, and that they were being taken away into hell.’

The spirits then ascended with exceeding joy.

Er said that these were the penalties and retributions, and there were blessings as great. After the spirits in the meadow had tarried seven days, they were obliged to proceed on their journey on the eighth.

On the fourth day after, they came to a place where they could see from above a line of light, straight as a column, extending right through the whole heaven and through the earth, in resembling a bright and pure rainbow. After another day’s journey, they arrived at the place.

There, in the midst of the light, they saw the ends of the chains of heaven let down from above. This light is the belt of heaven which holds together the circle of the universe, like the under-girders of a trireme.

From these ends extends the spindle of Necessity, on which all the revolutions turn.

The shaft and hook of this spindle are made of steel.

The whorl is made partly of steel and also partly of other materials.

The whorls show their edges on the upper side. On their lower side, all together form one continuous whorl.

This is pierced by the spindle, which is driven home through the centre of the eighth. According to rim size, their rankings are: 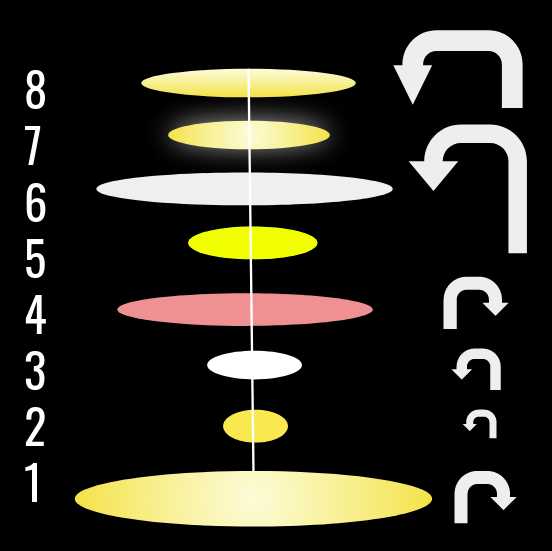 Socrates The whole spindle has the same motion. But, as the whole revolves in one direction, the seven inner circles move slowly in the other. In terms of speed, their rankings are:

*Superphysics Note: The image interprets the whorls as chakras and the spindle as the anthakarana which binds the chakras to physical reality. The key is Socrates’ description of the fourth whorl as having a reddish color which matches the Hindu description of the navel or third chakra as having a red color. The top chakra is also known to have the highest frequency and accordingly has the fastest speed according to Socrates. The lower chakras (Whorl 2, 3, and 4) are known to act opposite to the higher chakras. Socrates describes this as those latter whorls having a reverse motion. In yoga, each chakra has a specific sound, which is described below. On the upper surface of each circle is a siren, who goes round with them, hymning a single tone or note.

The spindle turns on the knees of Cause and Effect.

The eight together form one harmony. Round about, at equal intervals, there are the three daughters of Cause and Effect called Fates sitting on their thrones as Lachesis, Clotho, and Atropos.

They wear white robes and have chaplets upon their heads. They accompany with their voices the harmony of the sirens.

When Er and the spirits arrived, their duty was to go at once to Lachesis.

There was a prophet who arranged them in order. Then he took from the knees of Lachesis lots and samples of lives.

He went to a high pulpit and spoke=

He then scattered lots indifferently among them all. Each of them took up the lot which fell near him except Er himself (he was not allowed).

Each took his lot and saw his number. Then, the Interpreter placed on the ground before them the samples of lives.

Back to The Immortality of the Soul
Next The True Nature