The engines for Covid and influenza viruses

The Covid Star and the Flu Star

January 8, 2022
Note
The influence of stars on behavior is one of the links between Material Superphysics and Medical Superphysics

Have you ever wondered why Covid and influenza are prevalent in Europe but not in Africa?

Life (and Viruses) Come from Stars

According to science, all the matter in the universe came from stars via supernovae explosions. We extend this to add that viruses and simple bacteria, as life, also are included in such explosions. Life forms are then influenced by light from the supernova or cluster where they came from.

We imagine a Covid star shining on Earth to empower Covid which began in China on Dec 24, 2019. We then add the other successful variants as “Covid landings” noting the rotation and revolution of Earth relative to the Covid Star. This creates a “Covid Equator” or “Covid Line” which starts from the UK then goes to China, India, South Africa, and Brazil. 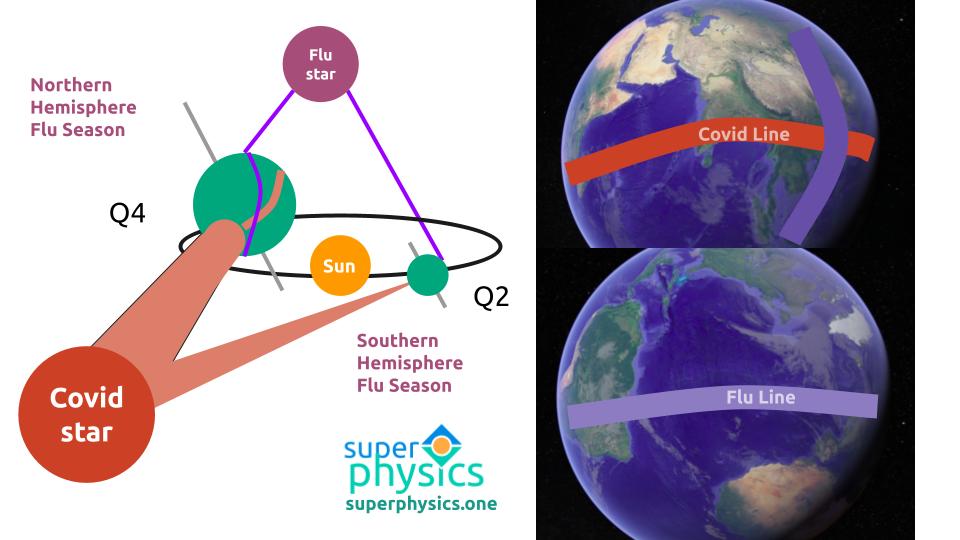 We then apply this technique to influenza.

According to “ The Latitude Effect ” (Almeida, Codeço, Luz), flu travels from North Brazil to Southern Brazil from May to July. So we lay the Earth on its side to create a “Flu Line” extending this line from Brazil onto Australia, China, Russia, Europe, and North America. 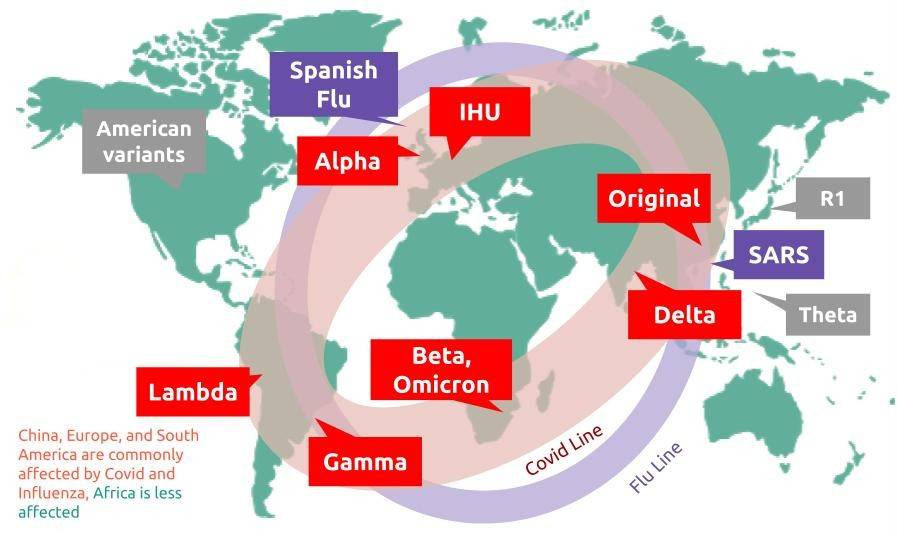 Southern China, on the other hand, is traversed by both the Covid line and the flu line. This explains why 12th centry historian Chau Ju Kua called Southern China a region of pestilence. This caused Chinese medicine to specialize in flu cases which has helped China to currently have lower cases than the West. China was able to take a negative phenomenon and make it positive, in line with Taoist thinking.

This star-based analysis, or out-of-the-box reasoning, is derived from Johannes Kepler who taught people to view phenomena from the perspective of stars and not people.

From here, we can suggest the following policies:

The Spanish Flu was the Covid Star

The Spanish Flu emerged in Kansas in the US on March 4, 1918. It spread to France and then throughout Europe by May and then declined.

In the US, it reappeared as a second wave from September to November 2018 notably in Philadelphia, Boston, and San Fransisco.

The fact that the second wave around Q4 was worse than the first wave of Q1 forms a pattern consistent with the Covid Star. The Spanish Flu naturally died out after World War 1 ended and this forms our advocacy to end the war against the Amazon to end the Covid pandemic.

How we cracked Covid via Regular Patterns

This pattern emerged thanks to the Omicron variant striking in South Africa near the same month as the Beta variant which struck that country earlier in 2020. This then created a pattern that was different from our original ‘spreading pattern*’ prediction of Omicron emerging in Indonesia or Malaysia by Q4 2021 .

*This assumes that the causal mechanism for successful variants is merely a high volume of infections or hosts. This volume then increases the chances for such variants. Thus, this assumption is “chance-based”

Instead, Omicron showed that Covid follows a more-predictable ‘cyclical pattern’ like influenza which has a known pattern:

But unlike influenza which is active all-year round, Covid is active mosty during the fourth quarter of the year.

By applying the orbital theories of Johannes Kepler, we guesstimated that the Covid star* was ‘underneath’ the sun on a far side. This caused the earth to come near it (aphelion) during the fourth quarter of its orbital revolution.

The Flu star, on the other hand, was either on top or below of the sun. This caused it to affect influenza on Earth evenly throughout the year. These stars are then within our own Milky Way since flu has been happening in Southern China for hundreds of years.

Superphysics
Back to How to stop Covid
Next Covid variants