The Kinship of Things

Gravitational Relativity -- Action at a Distance

The previous post, explained aethereal relativity which deals with the movement of quanta of aether (qoas) as ideas, feelings, minds, and societies.

This post will explain gravitational relativity that deals with the movement of quanta of spacetime (qosts) as galaxies and planets and their subtypes.

The Newtonian and Einsteinian movement

Newton described motion coming from an external force as a single movement. Einstein revised this by making it relative to frames of reference, as well as dividing it into smaller parts as tensors (as measuring rod S). 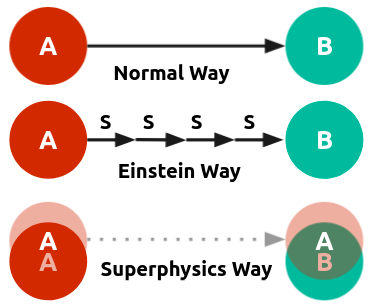 But where do all the external forces come from?

Newton and Einstein source it from matter: The more matter, the more the gravittational force. This matter then comes from a material Singularity that exploded as a Big Bang.

But where did this Singularity come from?

No one is able to answer this.

To solve this mystery, we throw out sophistical opinion of Einstein, Newton, and Aristotle that movement is sourced externally whether from concentric spheres or a fabric-like spacetime.

Instead, all movement is sourced internally, from the state-change of the object through its gravitational signature . For example, a man moves from the bed to the kitchen because his internal state changed. His mind switched from a sleep-signature to an eating-signature.

A more technical example is how an app changes from one screen to another, such as a red screen changing into a blue one. This done by changing its color-state-variable from red into blue. It gives an illusion of moving from a red screen onto a blue one when in fact the same screen is just redrawn to reflect the change in state.

This means that the universe re-drew itself while the man was traveling from the bed to the kitchen. This then matches the probabilistic nature of particle spin.

This paradigm then leads to new technologies for teleportation (instant state-change) and levitation (gradual state-change). It renders quantum fields and some of Einstein’s tensors useless, just as Copernicus and Kepler rendered the spheres of Ptolemy useless.

More importantly, it discards the sophistical ideas of wormholes, singularities, and dark matter (in its current definition) to be replaced with a more accurate depiction of the universe.

How does General Relativity lead to absurd wormholes?

Few people seemed to notice that this method is totally arbitrary. It creates a kind of space (and time) that can bend or be perpendicular to anything the imagination thinks of.

To confine this arbitrariness, Einstein uses c or light (which everyone perceives in the same way) to make empirical observations (that are common to all humans) possible. This c is then balanced by a cosmological constant as the medium or arena for the c.

This arbitrariness, established as a science, then necessarily leads to fanciful imaginings like singularities, wormholes, and dark matter to plug the holes and differences between the imagination and the actual nature of the universe. This is similar to Aristotle and Ptolemy creating concentric spheres around the Earth.

No one seemed to ask how would Einstein’s system work in total darkness. How would a blind man erect a pole to a cloud that he couldn’t see?

The proper and natural way to judge the space of a cloud on Trafalgar square is to know the nature of both the cloud and Trafalgar square. In this way, the proper location is determined by the relative differences of those two natures. A blind observer can know the cloud by the thunder it creates and how it compares to other sounds from Trafalgar square which he learns by experience. 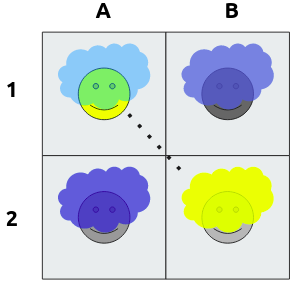 Assuming Trafalgar square has four squares A1, A2, B1, and B2. The person has existed in all squares and has heard thunder above each one, as well as above all the other squares. This leads to 16 total experiences.

In this way, the person in A1 who hears a thunder in B2 will know its location by extracting the relation of the cloud and the area from his memory. This relation is aethereal relativity, which becomes gravitational relativity when applied to the spatial layer.

This method does away with the use of light as the measuring rod, and so it can throw away c and lambda while still being within the nature of the universe. In Western philosophy, the obsession with light comes from Aristotle who put sight as the supreme sense. This is opposite of the sightless observations proposed by Pythagoras and Socrates (as well as Hinduism, Buddhism, and Taoism) which we are advancing.

Instead of c, it uses the relation of the person in two states (A1 and B2) with the state of the cloud in B2.

Notice how this system is similar to quantum mechanics which assigns a probability to each location through a ‘path integral’ formulation.

We replace the Einstein tensor with a Kepler tensor and replace equality with a ratio sign. Former constants, such as the Newtonian G, c, and lambda are put under “s” which represents the spatial layer. The stress-energy tensor is then a new G which usually represents mass.

We then apply his for Mercury’s precession: 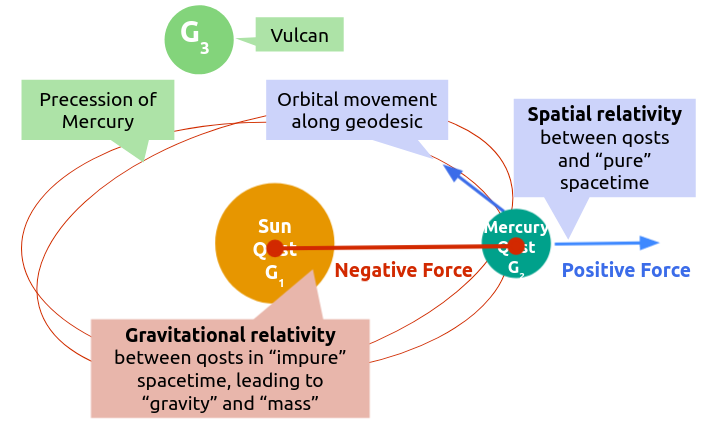 In the next post, we extend gravitational relativity into material relativity to add relativity to Newton’s laws while being in line with Nature and observation. However, it needs an explanation of the Cartesian View first.

Superphysics
Back to aethereal-relativity
Next Cartesian View