During his presidential campaign Duterte promised to give a comfortable life to the poor. However, the unstoppable rising prices* from 2020 directly contradict this promise since it makes life less comfortable.

To see where the contradiction occurs, let’s dissect Dutertenomics. Its most prominent parts are:

These policies are consistent with the Keynesian doctrine, except for “Pantawid Pamilya” which is Conditional Cash Transfer (CCT), a modified version of Universal Basic Income (UBI) implemented by former President Noynoy Aquino.

CCT is a neoliberal policy* that helps development banks such as the World Bank by giving employment to the bank’s consultants and its money. Likewise, tech startups lobby for UBI to give employment to themselves via blockchain and other fancy new technologies, even if there might be no added benefit for the poor.

*The non-neoliberal, non-liberal financial way of poverty alleviation is called microfinance. The conservative way is welfare either by the state via social security or by religion via thites or forced donations.

The original Dutertenomics itself is quite limited, so it also absorbed the NEDA* plan called Ambisyon Natin 2040. It was created by Arsenio Balisacan of the neoliberal Philippine Competition Commission during Noynoy Aquino’s administration.

*NEDA is the economic planning agency of the Philippine government. Ambisyon Natin 2040 is split into chunks called Philippine Development Plans, similar to Communist Five-Year Plans. The first plan is for 2017-2022. The next one is for 2023-2028.

Ambisyon Natin 2040 : Neoliberalism Under the Guise of Socialism

This policy was formulated by interviewing 10,000 people around the nation, asking them what they and the country should achieve by 2040. Since the country is poor, then of course we can expect that the answers will reflect the shallow desires of poor people:

It revealed that the uneducated wanted to study:

*Venezuela also spent a lot on teaching and social welfare through their Bolivarian programs, but is now dirt-poor. This is because we blindly expect teachers to teach the right things, not thinking that they could also teach the wrong things as well.

Unfortunately, these subjects also lead to low-value services and employment (in red). Few people want to study the difficult subjects that lead to high value employment (in green). 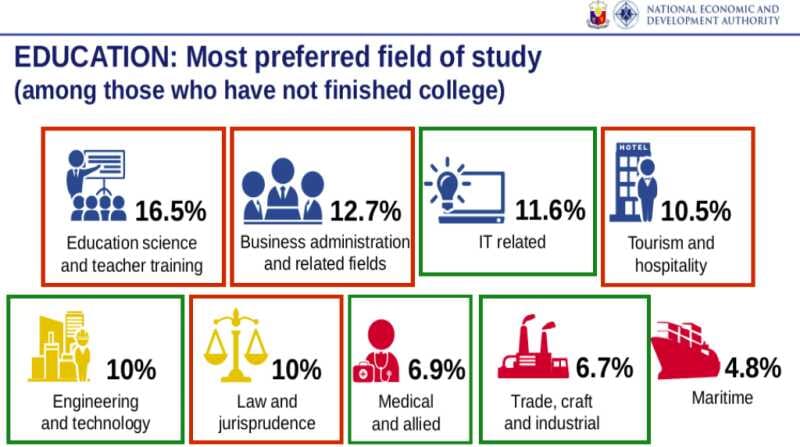 Also alarming is the preference for cars over public transport such as buses and trains. 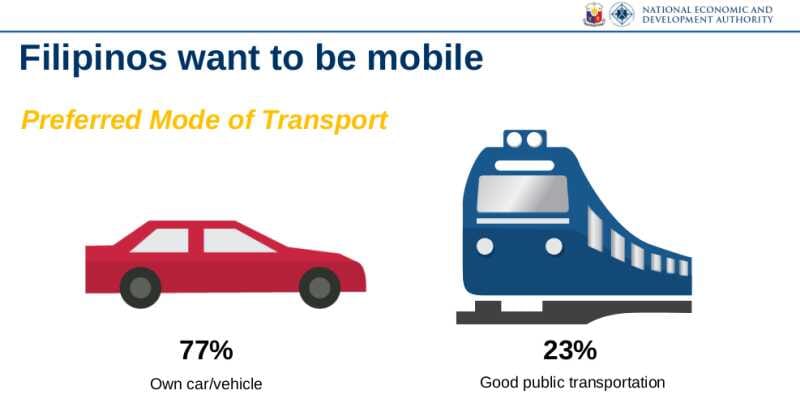 NEDA then built policies around this data:

As expected, these backfired when the unexpected pandemic hit:

The NEDA Flaw: A Reverse Kind of Survivorship Bias

The glaring error with the NEDA plan was that it created economic policy from interviews with the people. The problem is that a poor country like the Philippines will likely be full of poor people. If you ask poor people what they want, then they will give answers that will propagate the same poverty.

NEDA’s mistake is a kind of survivorship bias *.

*Researchers in the UK in World War 2 observed that the returning British bombers had parts of their wings missing. The Americans wrongly advised that armor should be added to those parts. But Hungarian mathematician Abraham Wald argued the opposite, that armor should be added to the non-missing wing parts. The Americans were looking at the effect, while Wald was looking at the cause.

An easy proof of this bias is the national preference for subjects like teaching, lawyering, tourism, and business administration that lead to low value jobs. Are Germany, Japan, South Korea known for their teachers, lawyers, tourism, or accountants? No. They’re known for their advanced manfuacturing as Siemens, Hyundai, and Mitsubishi.

*Tito Sotto is correct in saying that the country already has too many lawyers. Yet, public policy does nothing to discourage law schools or to make the bar exam more selective and restrictive

Another proof is the preference for cars over public transport. Did Japan, France, and Singapore solve their public transportation by allowing cars as a public policy? No. In fact, they had the opposite policy which oppressed car owners with high taxes and built subways and shinkansen instead of freeways.

By implementing policies that are OPPOSITE of what poor people want, the Japanese, Singaporeans, French, and Germans are actually able to have a more COMFORTABLE life.

By implementing policies the poor people want, Venezuela and Brazil put themselves into POVERTY.

More Proof of Ignorance of Policymakers

NEDA policy builds a lot of roads to address the demand for cars. They never think that if their policy succeeds then more people will actually own cars. These cars will then flood the new roads to create new traffic jams!

If policymakers just let people have their way, then the nation will degenerate quickly with everyone buying cars, flocking to easy jobs, and no one* doing the difficult or low-paying ones.

*This is seen in the lack of local vaccine manufacturing, simply because only a few people ever wanted to study virology

If everyone wants to be a singer, boxer, or online seller, then who will plant crops, build the power plants, do the medical services, or create vaccines?

If few people plant crops, build power plants, hospitals, and vaccines, then those goods and services will have a shortage.

If there is a shortage then their prices rise and there will be more Pharmally-style importation.

If their prices rise then life would not be comfortable, violating the very goal of the policy.

Proof of this is the collapse of the economy in 2020 which NEDA says is expected to recover only after 10 long years. They blame the pandemic instead of themselves. This is absurd since the economy of other countries are not so badly affected. Even poor Cuba, heavily embargoed by the US, is able to make Covid vaccines simply because the government encouraged more people to study difficult subjects.

Ambisyon 2040 is still consistent with our earlier observation that local policymakers, whether liberal ‘dilawan’ or nationalist ’loyalista’, are ignorant of cause and effect . This ignorance seemed to begin in the early 1960s after the presidency of Magsaysay* and Garcia who still had the right policies.

*Magsaysay for example fought against the pro-American Bell Trade act, whereas Macapagal blindly accepted the pro-American decontrol policy of 1962. The decontrol destroyed local industrialization and allowed the country to get in debt with the IMF – a practice carried to perfection by Marcos and Latin American dictators

The Rice Tariffication Law is the single biggest mistake of the Philippine Development Plan 2017-2022 of Ambisyon Natin. It began with the rice crisis of September 2018 as the rapid increase in the prices of rice. But this was a natural consequence of the increased taxes from the TRAIN tax reform which was supported by NEDA itself. 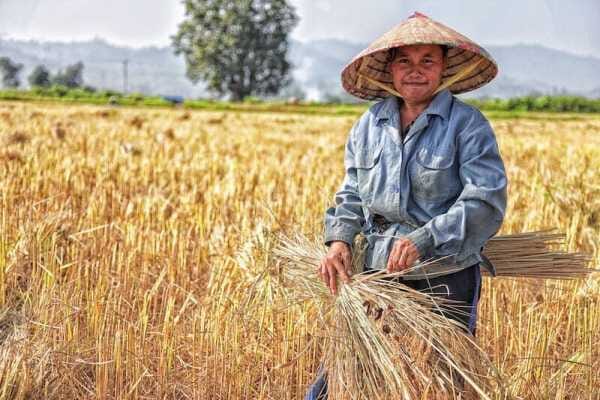 Instead of strengthening NFA* to deal with the crisis, the Senate and Lower House actually destroyed it through the Rice Tariffication Law (RTL) in order to allow rice importation.

The Masterminds of RTL were familiar names:

The lawmakers thought, that by removing quotas and imposing a tiny 35% tariff that went to local farmers, local rice production would increase as to reduce the price of rice.

In reality, the warehouses didn’t bother buying from scattered local producers* and instead bought in bulk from a single importer, gaining from economies of scale. Without buyers for local rice, the local farmers had a glut of unsold rice. This is similar to local carrots not finding a market because the market was already occupied by Chinese carrots which could be bought by warehouses easily in bulk.

*The error of the proponent of RTL was to apply equilibrium theory (1.5 mb pdf) on a basic seasonal necessity such as rice. This is the same error that liberalized California’s power industry as the energy spot-market, that led to their energy crisis. Gloria Macapagal-Arroyo imported this scheme to create EPIRA that regularly brings power outages and price spikes.

Didn’t the lawmakers know that the secret to rice and agricultural self-sufficiency is for the government to control all parts of the chain from production, transportation, milling, warehousing, wholesaling, and even exporting?

Didn’t they know that this is what Vietnam does with state-owned Vinafood which allows them to export rice cheaply to the world?

Didn’t they know that Marcos replicated this with the NFA (milling), Food Terminal Inc as FTI (storage), and Kadiwa stores (retail) which allowed the country to export rice in the past?

The Problem with Neoliberal Keynesianism

These problems are really rooted in the flawed assumptions of Keynesianism which spread after the 2008 Financial Crisis. Because of the doctrine of profit maximization, the burden of driving growth fell to the government which had to build huge projects, get debt, then raise taxes to pay for that debt.

In the case of Dutertenomics, TRAIN and food importation (Rice Tarrification) was used to pay for Build Build Build. It oppresses consumers and farmers to support the construction industry. It is not a growth that is inclusive nor balanced.

Our social cycles model predicts that the pandemic will last a long time, yet NEDA and lawmakers are still acting like the old normal. They have not scrapped their old neoliberal ways and still think that market forces will somehow relieve the people of their suffering.

Market forces cannot solve the current economic problems of the Philippines because such forces are based on selfish-interest, while the alleviation of the suffering of others is a selfless-interest. A person, policy, or system cannot be selfish and selfless at the same time!

Pharmally was able to buy Lamborghinis simply because it used the market forces of supply, demand, and financing to its private advantage, at the expense of a huge public debt which has to be paid by future generations.

In fact, the pandemic has proven that nationalized basics* via semi-state-owned corporations are the way of the future, as proven by China and Singapore**.

**Singapore has the best healthcare in the world, with 80% of its people using government-owned hospitals, and the rest using private hospitals like Raffles Medical

Only the close coordination of various essential services can create a society strong enough to weather the shocks from global warming caused by the selfish behavior of market forces. This close coordination can only be done by the government which is supposed to have the public interest.

Government management of mercantile projects like this requires orderly, vigilant, and parsimonious administration, like those in Venice and Amsterdam..The post office is properly a mercantile project. Its capital is not very big. There is no mystery in the business. The returns are certain and immediate.

The Wealth of Nations, Book 5

Our next post will explain how to implement this solution and overhaul Ambisyon 2040 into Ambisyon 2050.

Superphysics
Back to Duterte
Next maharlika-2050